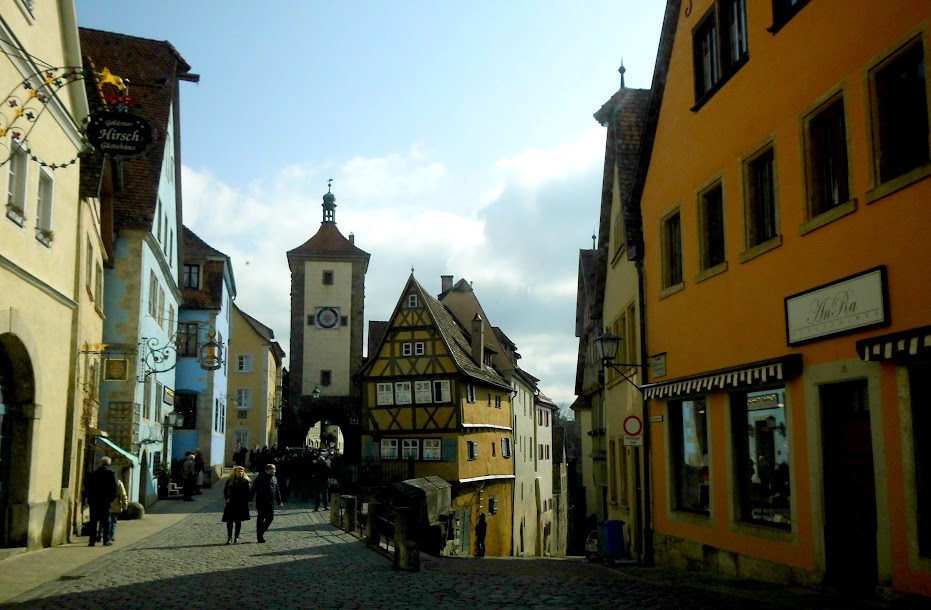 This past weekend, my husband and I drove to Rothenburg ob der Tauber, a town in Ansbach District of Germany. I had always pictured Germany looking just like this preserved medieval town. Since we traveled here during off-season, the weather wasn’t the best, but that didn’t stop us from enjoying ourselves. At this time, we had gray skies, cold weather, minus rain and snow. We spent only a little over 24-hours in this historic town, so we have to return to do the things we couldn’t fit into our short stay.

Let’s get started. Founded in 1170, the settlement of Rothenburg and its citizens gradually built a fortress wall around the city. King Rudolf of Habsburg declared Rothenburg a Free Imperial City, which reigned from 1274 to 1803, then became part of Bavaria.

During the Thirty Years’ War, Rothenburg suffered from religious conflicts with the Emperor, attempted takeovers, captures, economic ruin, and plague. In 1871, a Jewish community settled there until 1938, when evicted by the Third Reich, who thought of Rothenburg as “the most German of German towns”. In 1945 WWII bombs dropped destroying houses, towers and 2,000 feet of castle wall. Because of the history and beauty of Rothenburg, the U.S. Assistant Secretary of War ordered to refrain from using artillery. Six U.S. Soldiers marched to the gates, one spoke German, and advised the commander that they would spare Rothenburg of additional bombing if the Germans agreed not to defend it. Commander Major Thömmes went against Adolf Hitler’s orders and surrendered the town. The citizens began to rebuild the wall with donations. Those who walk the castle wall will find bricks with the different donor names.

First, we went to the hotel to check in, and walked down the street to our “apartment”. While booking, it stated that it had a kitchen, which we forgot about, so our hotel room turned out to be the entire first floor. My husband read somewhere that the building we stayed in dated back to the 14th century. Can you imagine the history between those walls? 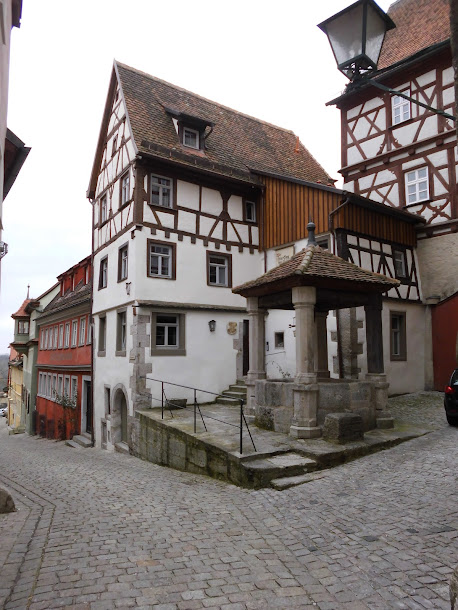 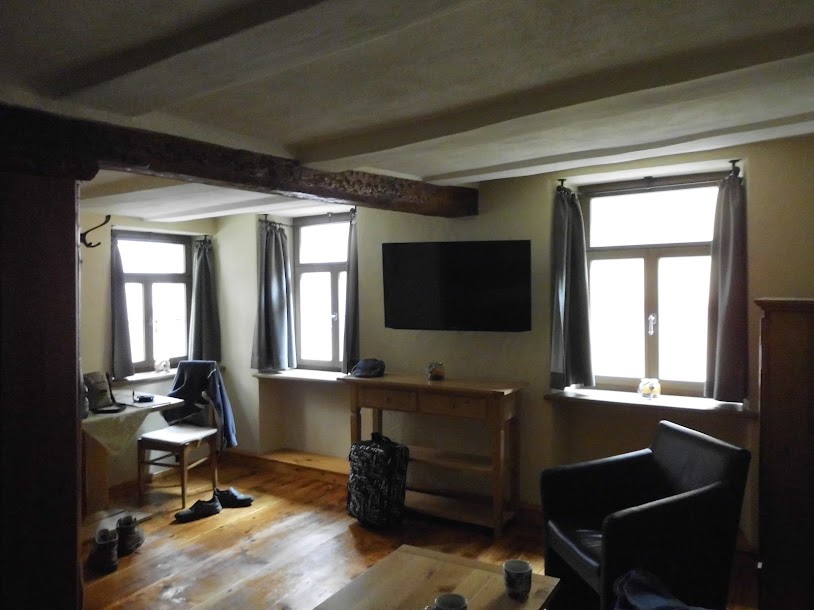 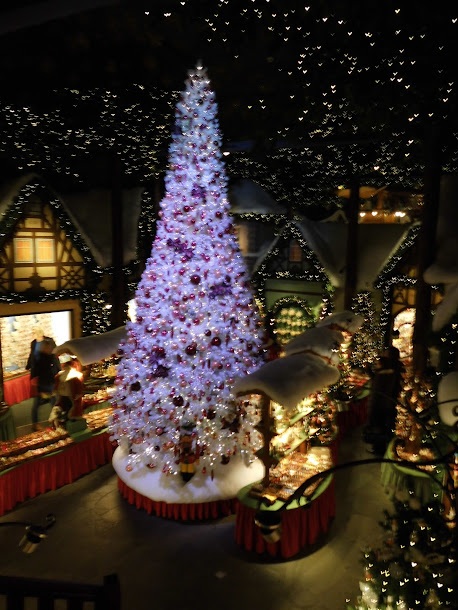 From there, we walked around the town and along the castle wall. These are just a few pictures taken from a gate, the garden, the town, and castle wall. 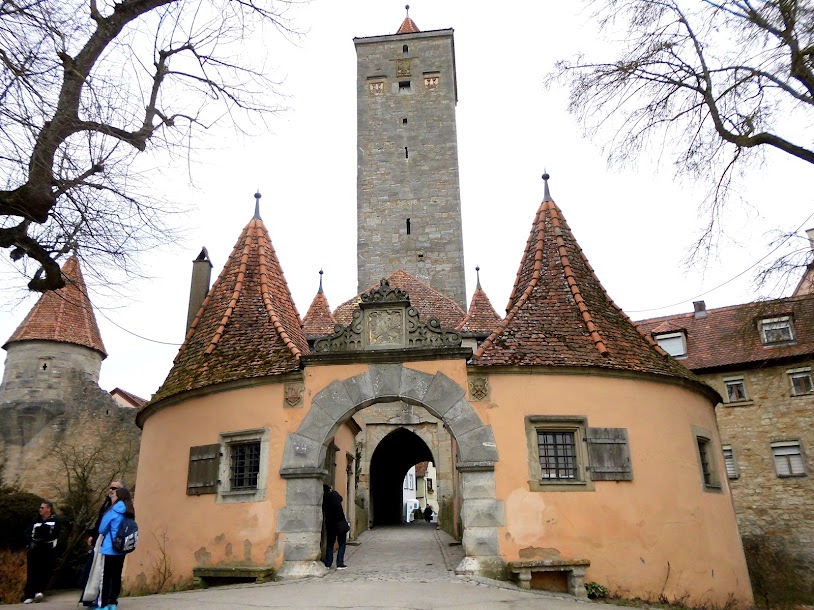 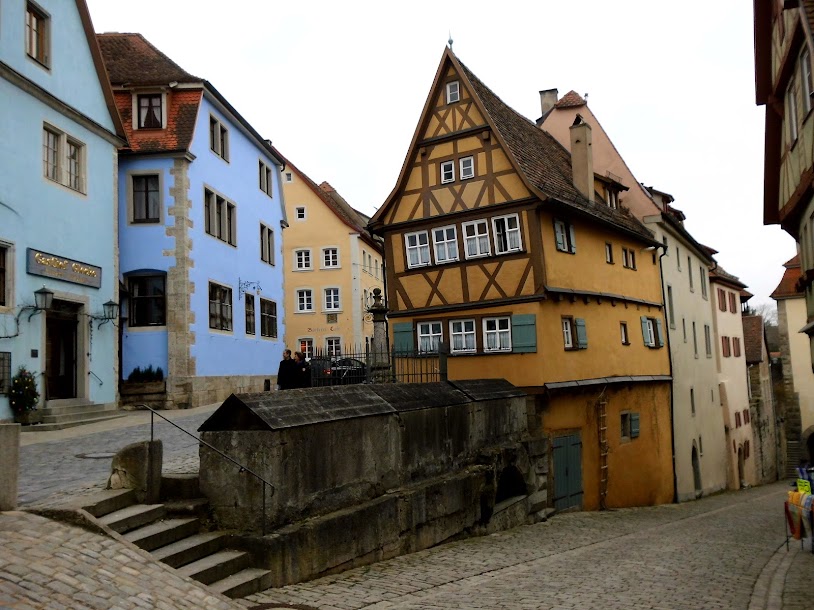 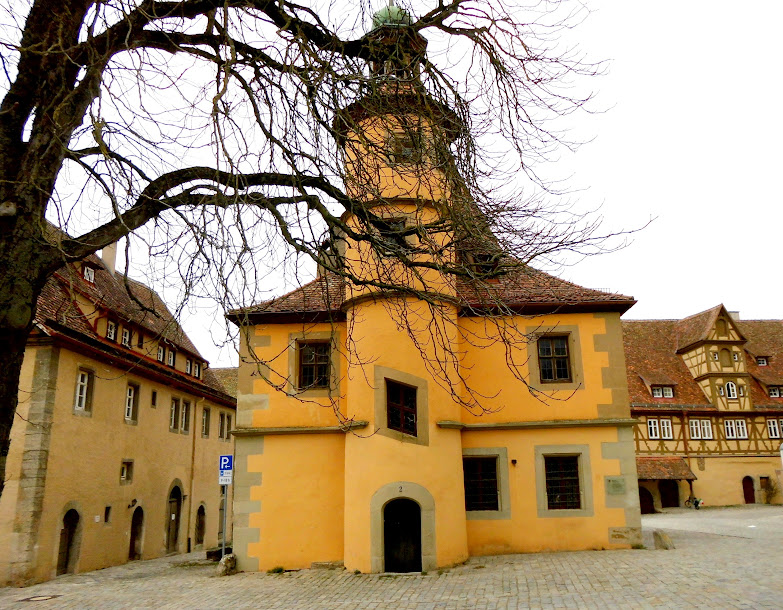 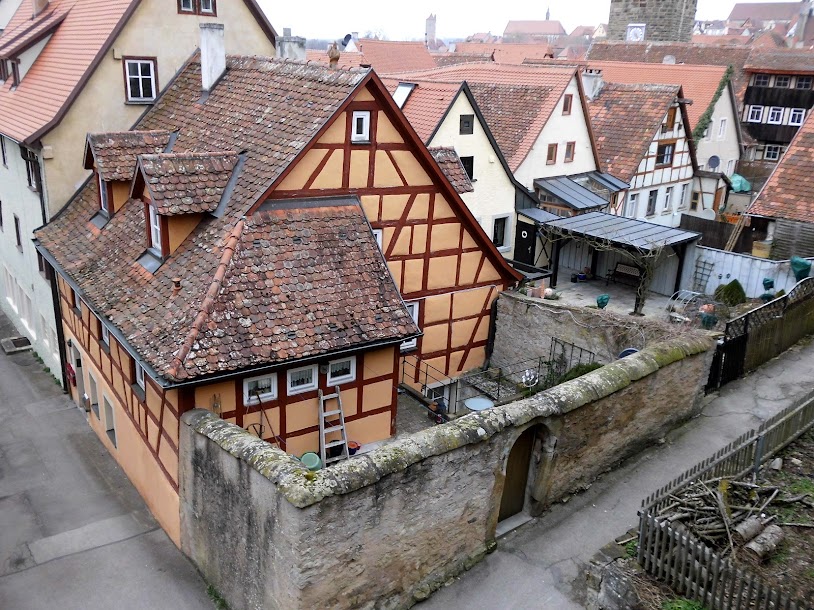 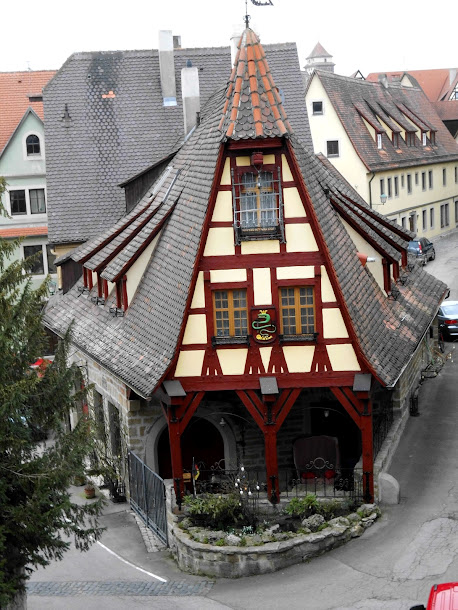 In the evening, we took the Night Watchman’s Tour. It was a bit cold, yet amazing how different a city looks lit up. 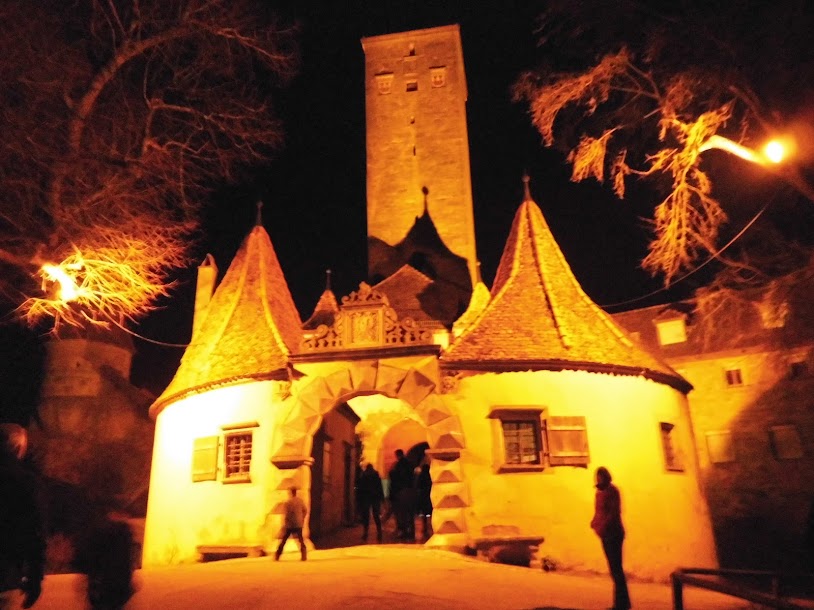 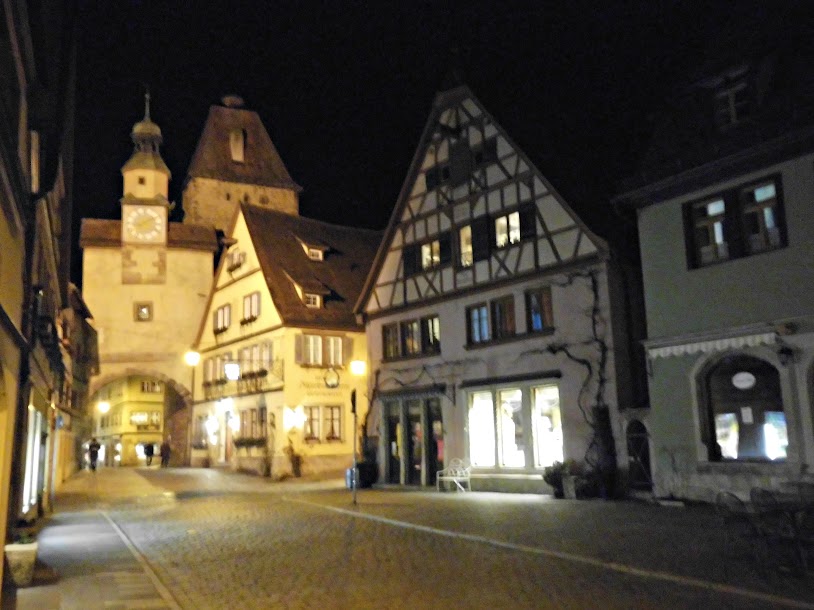 The next day, we finished the castle wall walk, which altogether is 1.5 miles. We did a lot of walking in those 25 hours that added up to 7.5 miles. But we ate well. 😀 The first part of the wall was built around 1080, taking years to complete. I had so many pictures, but I didn’t want to bore you so here are just a few from the castle wall. 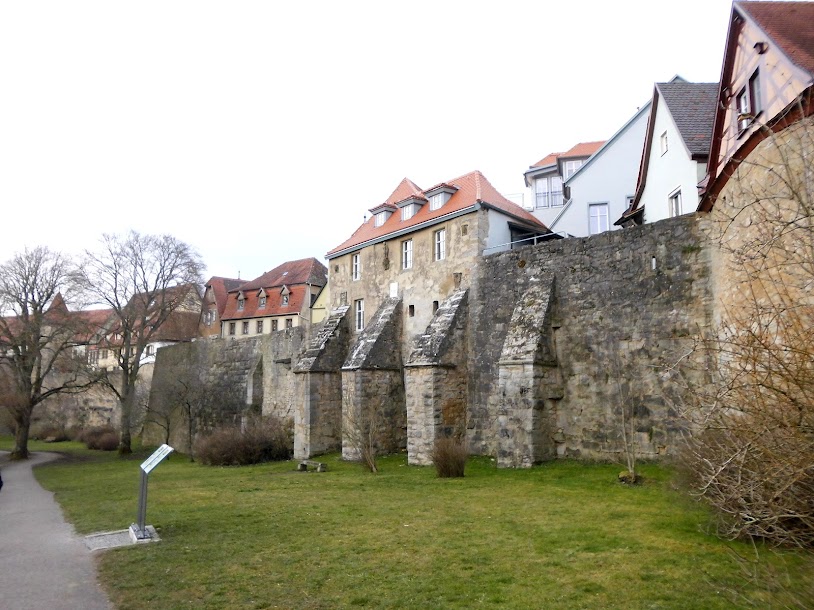 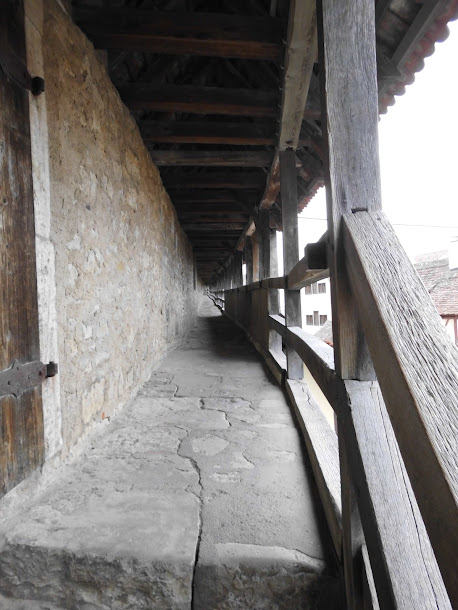 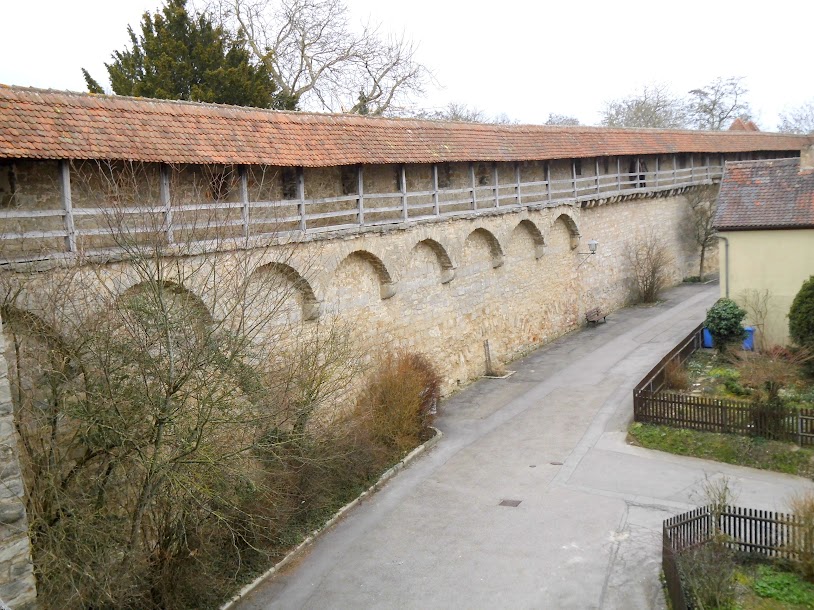 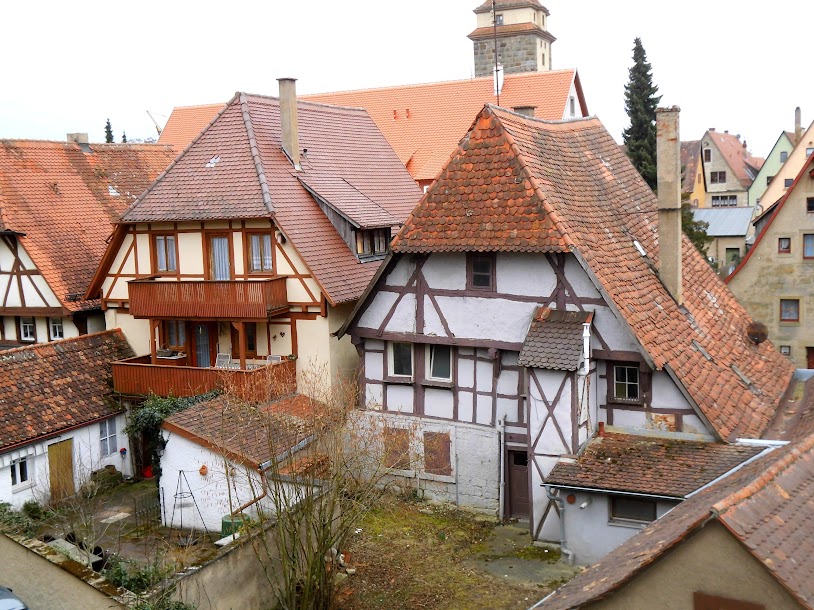 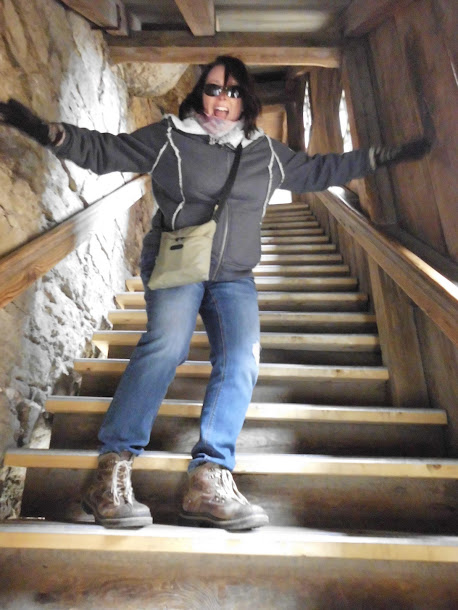 We went into a city museum where they housed old pieces and articles, some dating back to the Thirty Years’ War. In the museum were old prison cells where they tortured people for confessions. 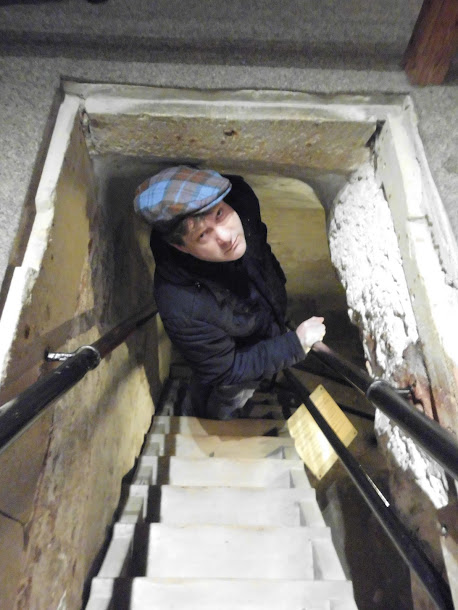 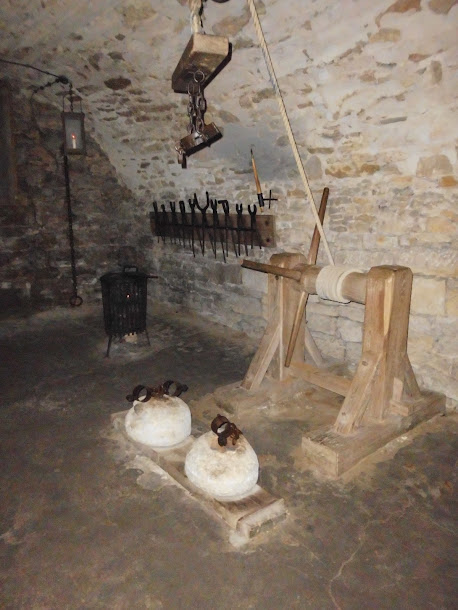 No, this fake man has not been preserved since the medieval times. 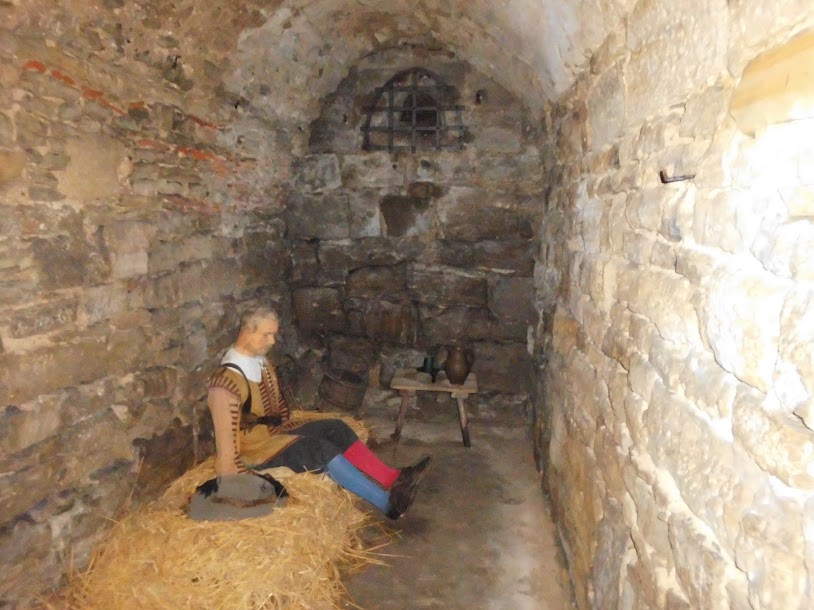 Then we went to the Crime and Torture Museum. The top picture is of a pillory cage and the other is where people were shackled and shamed. 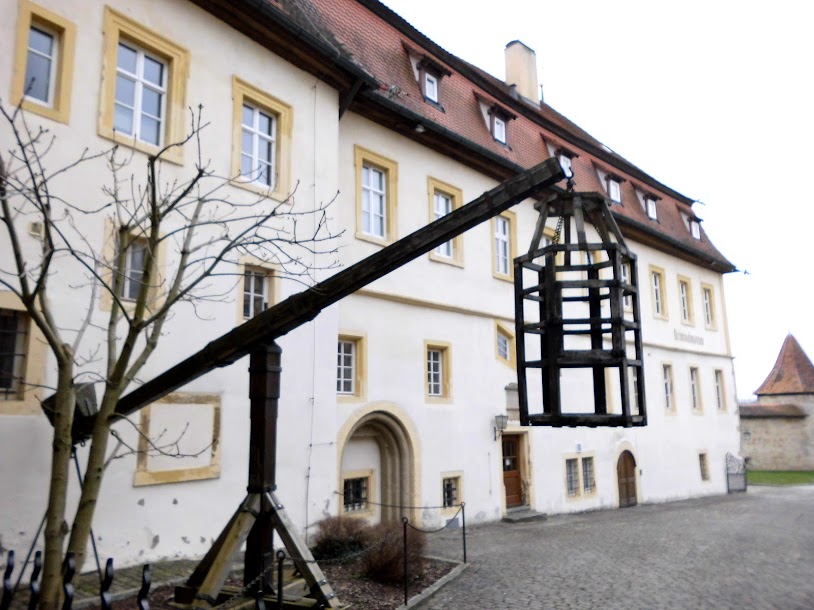 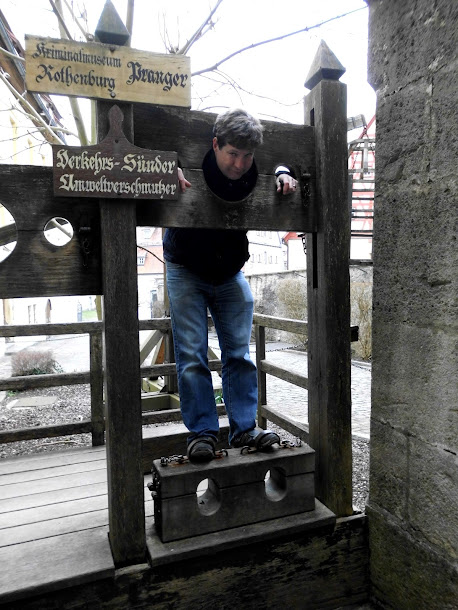 Before we left Rothenburg, we drove down to the double-bridge to take a few pictures and then of the moated castle, built in 1388, where Heinrich Toppler lived. 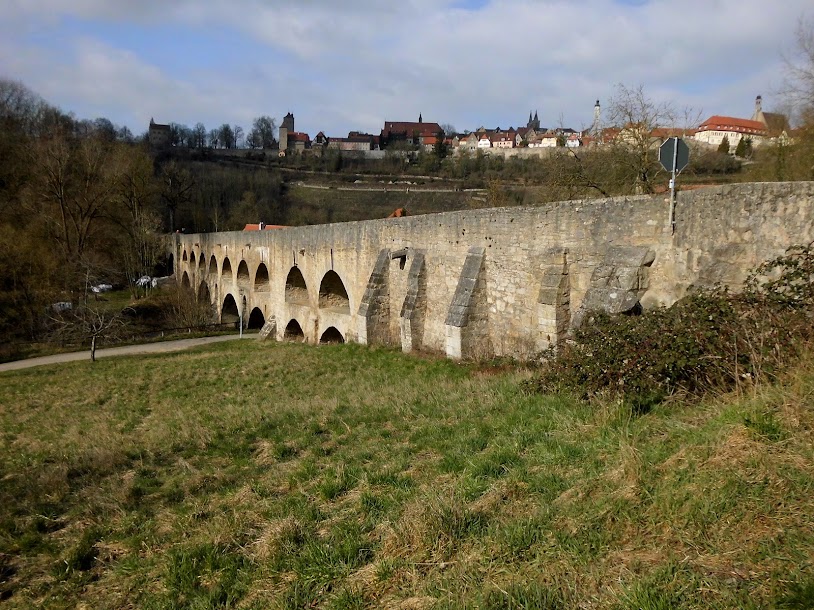 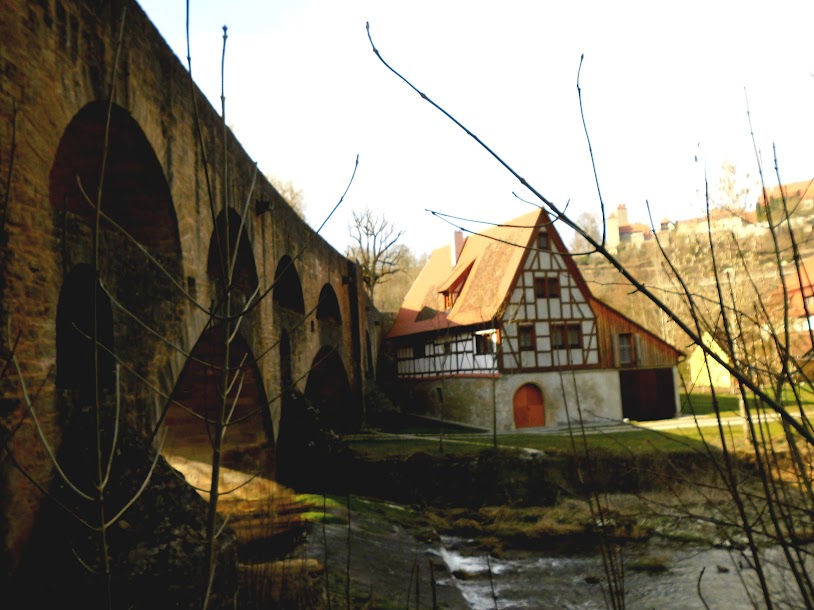 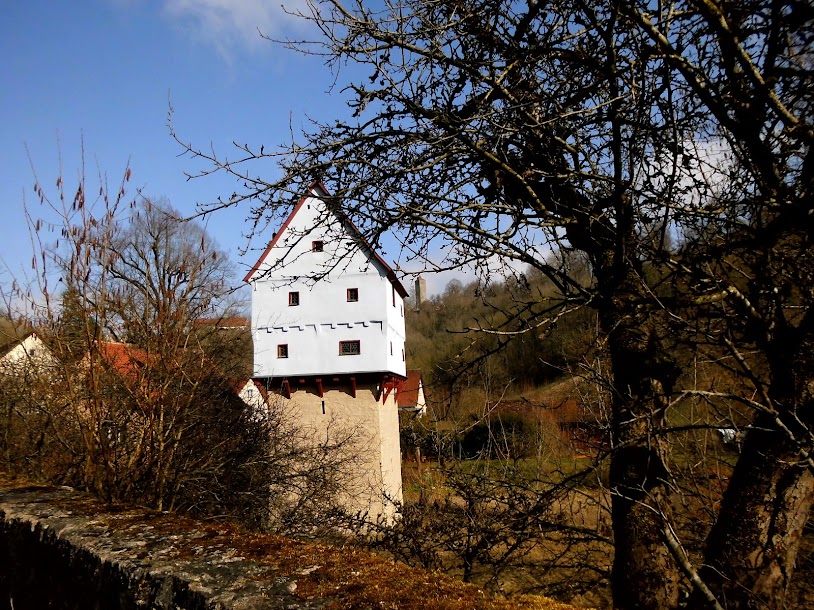 On our way home, we saw this from the highway so I thought I’d share it with you. 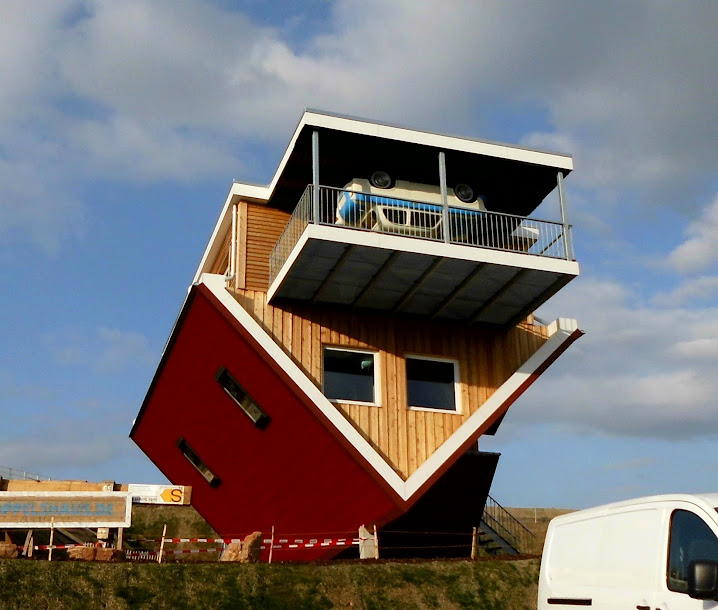 There are so many things I wasn’t able to share here with you, because of the amount of pictures and information, but I hope you enjoyed this brief medieval time. Auf Wiedersehen!

8 thoughts on “A Trip Down Medieval Lane”